121 FREE: From Dollar Signs to Despair – Profitable Trading is Closer Than You Think (incl. Video Training)

I write this at a massive turning point in my life.

The contracting job I had been at since February this year, ended last week. Christmas is upon us and I’m off to Australia for a few weeks vacation with friends and family from the UK.

But what happens when I return is the big question. And hence the significant turning point.

I have no job. And these websites bring in some money, but not enough to survive, let alone thrive. So it leaves me with one thing. The thing I set out to do at the beginning of this journey:

To finally make an income from trading.

After 21 years in the workforce, and another 21 to go, what more motivation do I need?

I have a fantastic mentor in Andre Stewart, who is behind me 100% and genuinely makes a living (#understatement) from trading.

It’s now a case of applying myself using the following formula: educate, practice, review and execute.

From Dollar Signs to Despair

I thought the above would have been fait accompli (mission accomplished) by now. Especially the journey I’ve been on since my last update.

It started with a tonne of new educational material Andre dropped on me which changed my view of the markets completely. I was able to rapidly create a trading system that had unreal results. Almost zero draw down and sometimes over 20:1 reward to risk.

I was so excited I didn’t sleep for days. I had run it across, what felt like, a significant amount of historical price data and the results astounded me. I even tried it on a different currency pair and timeframe and “boom!” it still worked perfectly. My final test was a demo trade. Once again, perfect entry and about 1:5 reward to risk.

Next step, fund account and off to the bank I go!

Eager to get this bad boy printing cash, I dove into a market I had never traded before (AUDJPY) at a time when it didn’t move very much and what do you know… the first trade is a loss.

I was only risking 5% of my account so I knew I had plenty of losses to work with – while using this highly accurate system I hadn’t properly back tested.

So, onto the next opportunity (same pair, similar time)… LOSS.

Emotions started to creep in again and I felt I had no chance of losing a 3rd time round using this laser sharp accurate strategy… DOH… 3 losses in a row.

I needed help. So called Andre in and he was able to confirm that the market was not planning to head in my direction for quite some time. He also mentioned the time of day was poor for trading.

Later that day, after London Open, I felt like I was emotionally ready to give it another go. This time I was sticking with a pair I knew and using extra confirmation (not just the new system I had created).

I finally picked a winner. A winner that took me back to about break even for the day (minus broker commission).

In theory I should have been back on track, right? Unfortunately, the confidence in my newly found system had gone. I now started finding wholes in what I thought was a golden approach. I haven’t returned there since.

My dreams of “this is it!” were dashed. It was back to the drawing board.

I thought it was going to be months before I would find myself in the same situation, but little did I know it was only another week or so before I had an even better approach – based on the original one what’s more!

This time my excitement was less so, but I was still excited nonetheless.

Fast forward 15 trades and one winner.

My interview with Russ Rausch provided me with the answer to where my systems went wrong.

I started to focus on the outcome and not the process. I was  too much $$$ and not enough discipline. I actually never placed a live trade using my new and improved system. I started doing weird things like diving in on news spikes. It was almost like I was in some drug induced state where logic was nowhere to be found.

I was contemplating showing everyone this account so they could follow along. But to be honest, there’s not much left of it now, so there’s not a lot to show other than a sharp downward sloping curve into the abyss. Like so… 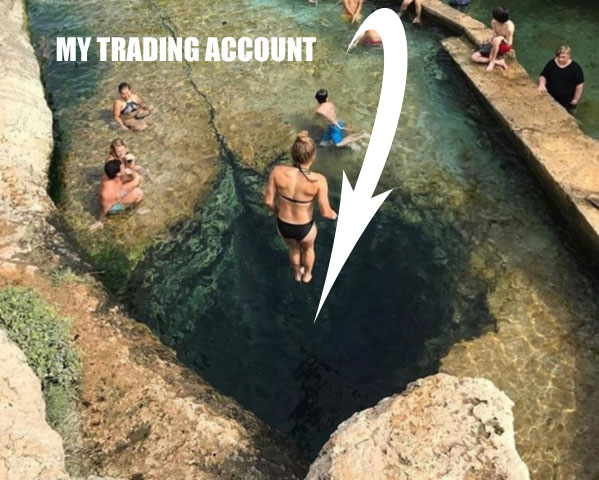 I have since started back on the process, ignoring the outcome, knowing it will come.

Success is Closer Than We Think

After the disaster above, I turned to my mentor Andre for some wisdom. I ended up asking him a question. One I haven’t asked much on the show, but one that will help all of us.

“Was your shift to profitable trading as sudden as: One day you were struggling and frustrated, and the next you were profitable?”

His answer surprised me.  A resounding, “YES”. It was as sudden as that.

So, what does that mean for those of us who are struggling?

Simple, when you’re at your lowest… most frustrated… ready to give up… point… You may be just one day away from your dream of leaving your low paying job or stressful business.

We have hope people!!

See Andre examine my winning and losing trades (you’ll be surprised at how much you actually learn about price action from this 33 minute video):

It actually takes less than 1 minute if you’re unfit 😉

The thing I like about it is that I don’t need to prepare for it. I don’t need to get a bag of stuff ready to leave the house. I can just drop down and get it done… before I pig out on junk food or straight after a sugary dessert.

Watch the video below to see how you do these three simple exercises.

Wishing you and your families a Merry Christmas and a Happy New Year!