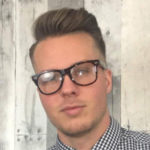 Out of the United States, Vancouver, Washington, Derek found his way to profitable trading in about six months. A scalper by definition, he loves the one minute chart, even though he’s looking for a trade to be confirmed by bigger timeframes as well.

Derek’s profitability is impressive: 95%-98% winning rate. A strong believer in pattern recognition, the best advice he has is to NOT focus on money when trading.

His trading strategy is based on bespoke patterns that have the tendency to repeat on and on, and he simply trades them as they appear. Most of the time Derek trades the GBPJPY pair but can be found trading the EURUSD, among others. You can find out more about his strategy in the interview below or join his program at Angel Traders.

In the show Derek shares:

How I Made 7-Figures & Now Manage Billions

From "C" Grade to "Cash" Grade

ICT Banned Him, Now He Trades Forex for a Living

They Discovered "The Missing 5%" You Need